I woke up this morning from a dream in which I’d just bought a new house. It was a big house, but complicated, with odd passages meandering in this and that direction, and bedrooms sprouting off from one another like mushrooms. The thresholds of the various rooms were all at different levels, so I had to step constantly up and down to pass from one room into another. I wandered through the house trying to find my way, but I couldn’t seem to make sense of the floor plan. I was always discovering a new room that hadn’t been there before. The interior decor was similarly odd. Each room seemed to have been haphazardly filled with random furniture. No overall guiding principle was evident.

I should mention here that this ‘dream house’ (which is more of a vaguely nightmarish fantasy than the ideal the phrase evokes) is in stark contrast to my real Amsterdam flat, which consists of 72 square metres of tightly organised, harmoniously decorated, perfectly functional space. 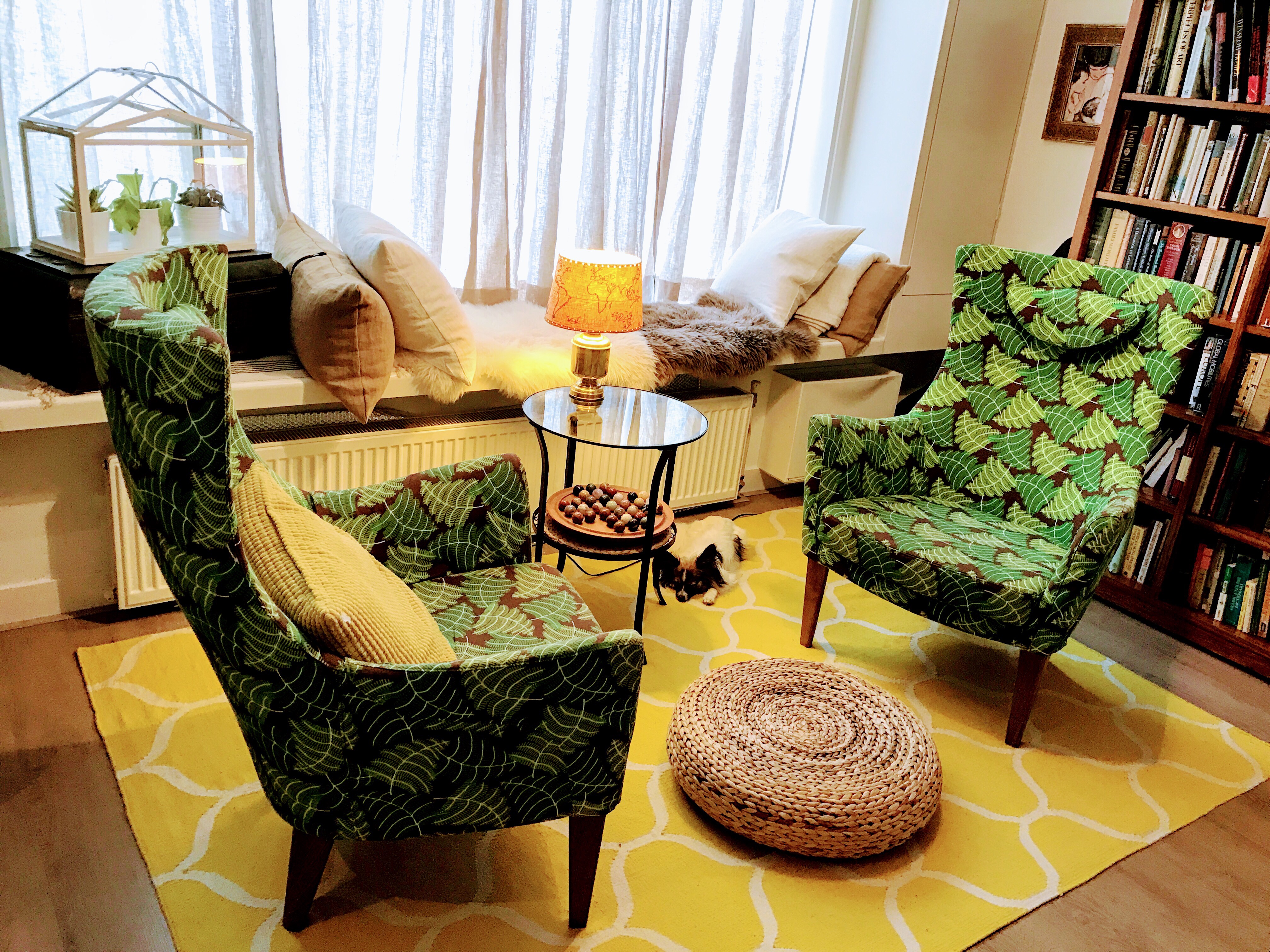 At home in Amsterdam

So where did this house in my dream come from? In the way of most dreams, it’s hard to be sure. It could very possibly be some unholy melding of whatever book I’m in the middle of at the moment, too much cheese at dinner last night, and certain eerily-lit catacomb tombs I visited in Malta over Christmas last year. But home has always been something of a metaphor for me. I am prone, when facing a difficult problem or challenge, to imagine that the solution lies in simply moving to a different place.

If I admit it to myself, a fair percentage of my adult life has consisted of gallivanting about the globe attempting to find that perfect place that would solve for X. I was always, as I articulated in the tag line of the blog I started long ago to record the process, “in search of a dream to call home”. Or we were–my husband and I, who married young and had two babies in the space of a couple of years, and swore that it wouldn’t tie us down in a life of responsibility, or cause us, heaven forbid, to “settle down”. It didn’t. We didn’t. Settle down, that is. The “Home Sweet Home” page of our family website lists 23 different dwellings during our 13 years of marriage so far. 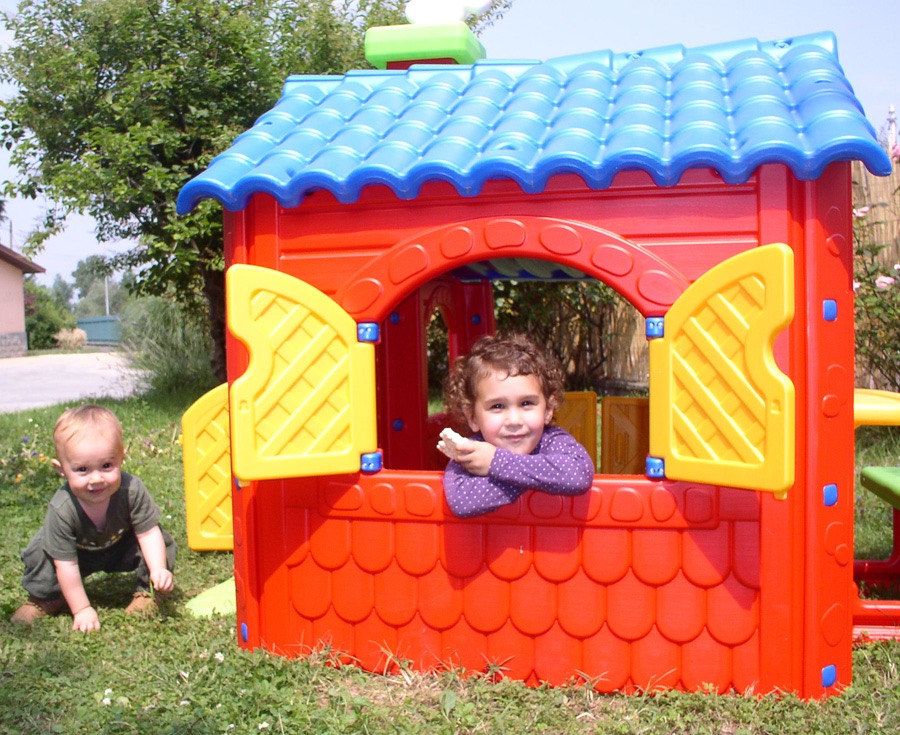 My children playing house long ago, while I played house too.

I’m not even sure where this idea of moving came from. My husband, it is true, is a third culture kid who went to a different school every year from the fifth grade on. But a lot of the impetus for moving came from me. I was fixated, for example, on the idea of moving to Europe–enough so that I figured out a way to get our little American family Italian passports, a process that of course involved a move to Italy (and another move to a different Italian town once we got there).

Then there was the time we moved (back) to Italy just out of sheer will and determination, which quickly turned into a move to Ireland in pursuit of jobs for English speakers. This morphed into a move back to Italy for a job with the mayor’s company in the town where we got citizenship, and then several months later a move to Tunisia, where we imagined working on our business under grass umbrellas on the beach as our children frolicked in the blue Mediterranean. Except that the very day we were meant to fly into the country, the despotic president flew out, fleeing the revolution, so the airport was shut down. Undeterred, we flew in the next week, revolution or no revolution, not about to let our quest for home be disrupted by world events. 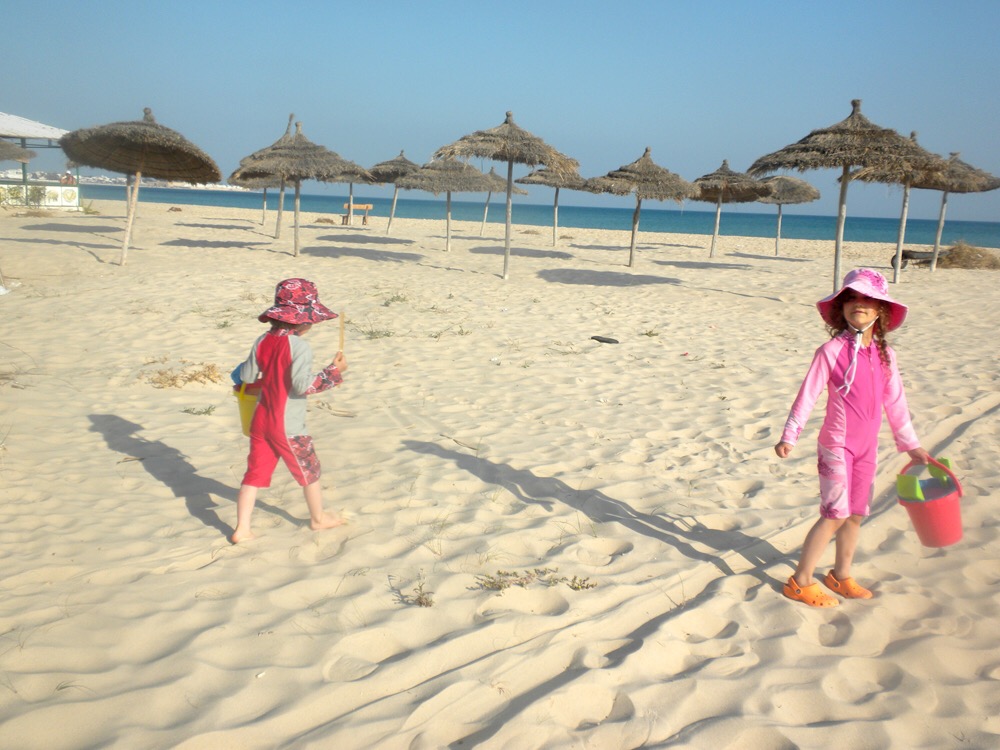 And then there is Amsterdam, where I had spent one day once long ago, a dream of romantic canal bridges and quirky, narrow houses. We’ve lived here now for two years, and though I’m in love with the place, I still can’t stop seeing all those other skies that live in my mind.

If this is beginning to sound pathological, I understand. I look back and sort of shake my head at myself. At the same time, however, I understand, because I am myself. I can go back and re-follow my thought process, and it still seems logical to me. If for some people life is a journey, for me it is a destination of sorts; an indistinct, shifting mirage that’s always on the horizon; an ultimate home that’s never quite in focus unless I squint my eyes exactly right.

Whenever I’m about to move somewhere new, I fantasise about living there forever. But once I’ve been there for awhile, once the newness has worn off and the new place becomes familiar, an accomplishment rather than a goal, I feel a compulsion to move on, at least in my mind. I need something ahead that is still unknown; the imagined glimpse of yet-unseen landscapes that shimmer in the distance.

I used to think that I just liked moving; that there was something intrinsically nomadic about me, and that I somehow never needed a real destination. But that’s not it; I always have a destination in mind. Home for me is perpetually another place, the thing ahead, the ineffable Promised Land that exists as a sort of embodiment of my personal mythology. It’s the tantalisingly unknowable future, redefined in space rather than time.

The only thing that makes life possible is permanent, intolerable uncertainty: not knowing what comes next.

For some, hiraeth describes the longing for a home that no longer exists–something intimately known and then gone forever; the incomprehensible loss of something precious and definable. For me hiraeth is the persistent desperation for something that exists in a perpetual future state. I never come home, because home is always the place just beyond where I am now. 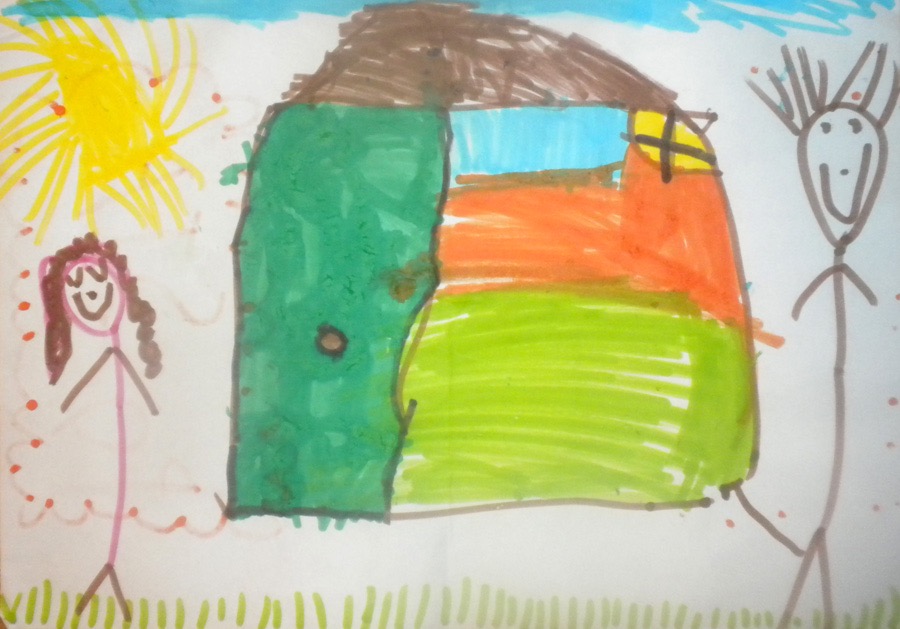 An early drawing by my daughter. The people are grounded, the house is not.

Where once I wanted to fix it, to finally find the place that felt perfectly like home once I arrived, I realise now that part of what makes life meaningful for me is this idealised eventual destination that represents the fulfilment of my goals and dreams. The reason my longed-for home keeps changing shape is that I fulfill my dreams, I accomplish my goals, and I am reborn into a new sense of longing for a different home. And when home for the moment is a tidy little flat in Amsterdam, the meandering strangeness of that house in my dream satisfies some urge for the unknown, while simultaneously giving me a peculiar sense of nostalgia for the home I have now, which will no doubt turn out to be no more of a final destination than any other, past or future.

How luminous the landscape seen across the crystal lens of an impending loss!

– Anne Morrow Lindbergh, Within the Wave

My past is littered with beautiful places that were once my promised land and became in their turn, however transiently and imperfectly, home. My present is illuminated in soft relief by the recurring premonition that home is still elusively elsewhere. And the future, ah, the future, beckons endlessly with the mirage-like promise of an ultimate homecoming that is always real enough–from a sufficient distance. 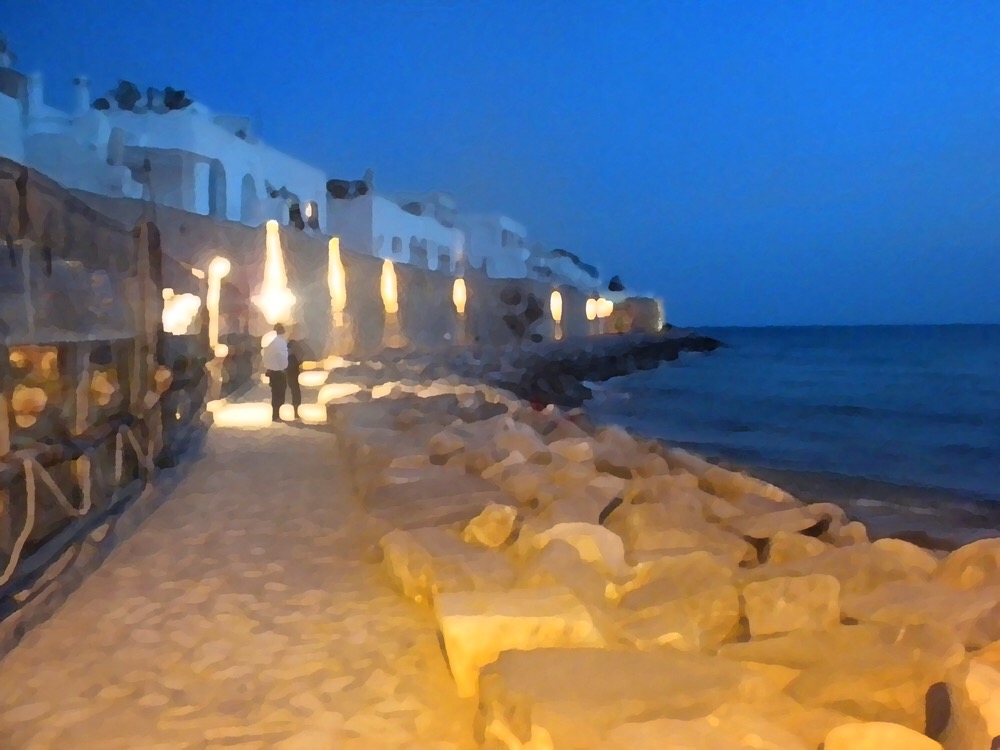