Hiraeth editorial team member Rowena Dring interviewed Amsterdam-based artist and illustrator Rachelle Meyer this week about her short movie Faces on the Ferry, the inspiration behind it, and her upcoming Kickstarter, launching on May 24, for which she has developed eight of the little sketches into larger silkscreen prints. Here is the movie, which screened at Hiraeth’s Light event last November, followed by highlights from the interview.

What I really see myself as is a global citizen; not just because I’ve moved from my original homeland, or home state of Texas to New York and then to Amsterdam. I feel like I’ve had several kinds of “hops” further into globalism, but I just generally see the world as borderless; I would like to see it as borderless as possible.

I think I connect myself mostly with my personality as a Texan, because there are a lot of qualities of Texans that I really love and I’ve also kind of adopted; such as I think Texans are mavericks. I think the way they pride themselves on being independent and inventing their own way of doing things, those are things I love in fellow Texans and in myself as well.

On becoming a borderless citizen

For me, moving to New York wasn’t a plan. It was a love affair. I arrived in New York in the back of a truck. I had been living in the back of my pickup truck and I went to visit some friends and decided I didn’t want to leave. What made me fall in love with New York was that it was such an international city. That was my first exposure to a place where you could meet people from all over the world, whether it sometimes clashes or not. You could continue to travel without actually having to leave your own city. And that’s what really got to me.

I think that was the moment when I kind of continued to hold onto my personality as a Texan but to consider myself a borderless, global citizen. Amsterdam is also a lot like New York, in that it is very much an international city but it’s more like an International Village. You don’t have the stress and panic of New York but we still encounter so many different cultures and different kinds of people here. You can happily ride your bike from one end of the city to the other and end up in the countryside. There are completely different aspects to life here that you don’t get in New York, while also enjoying all of the international culture. 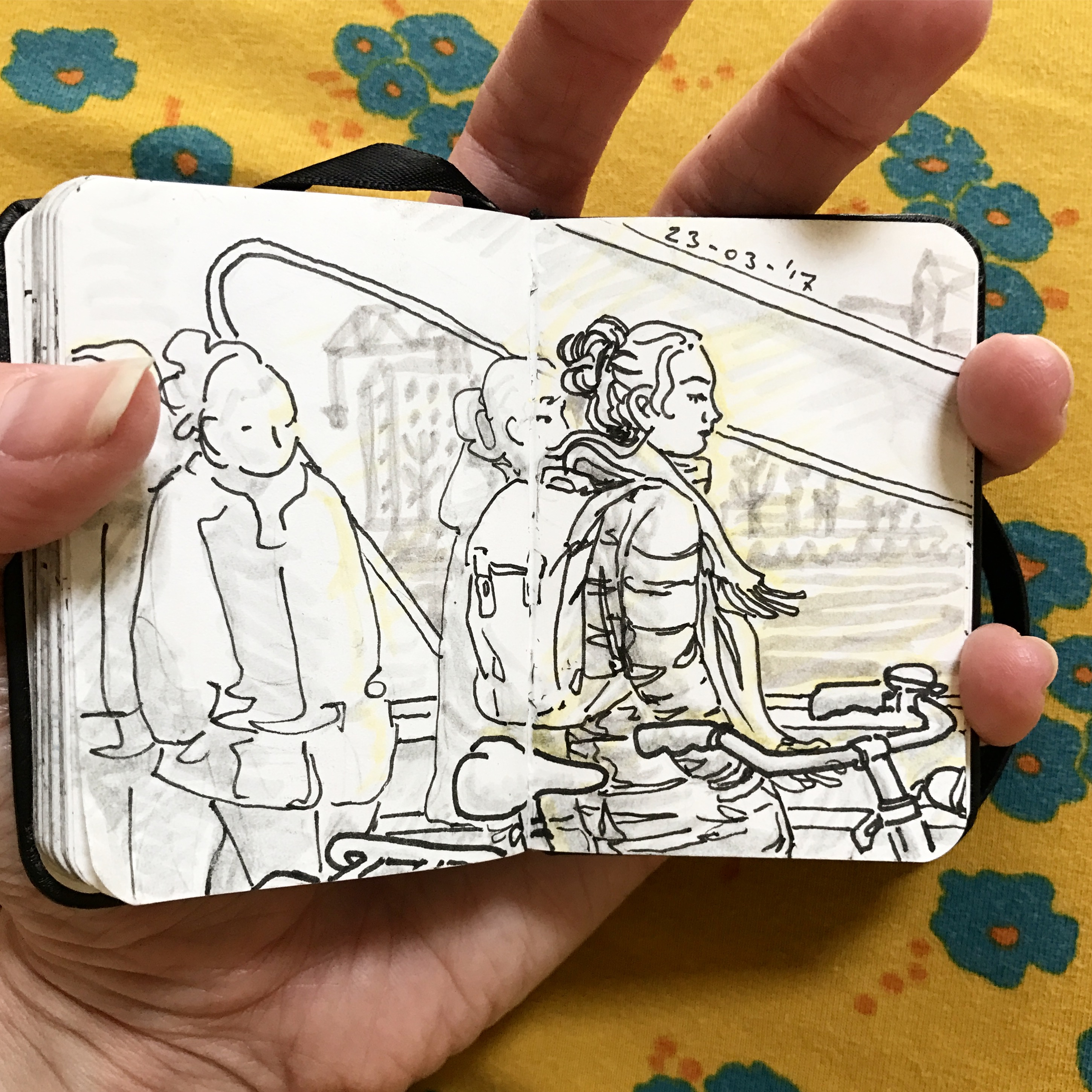 On moving to Amsterdam Noord (North) and discovering the ferry

I was in the position to start looking for a house to buy, and the most logical choice (the choice that was in our budget) was to look in Amsterdam North. My husband and I started riding our bikes out there on these little visits to go look at houses and go look at neighbourhoods, and we started getting that feeling of excitement that you get when you first move to a new city again. We both just sparked up a little bit as well because we would we go see a house we liked and say, “oh but what’s round the corner here and what’s over here?” It’s always so invigorating to rediscover a city.

After moving there I started making a daily commute from the North to my studio in the centre on the NDSM ferry. I had that kind of excitement in me when I would get on the ferry, that kind of alertness. Actually being in your environment instead of getting sucked into a smartphone, and looking at the people around me. 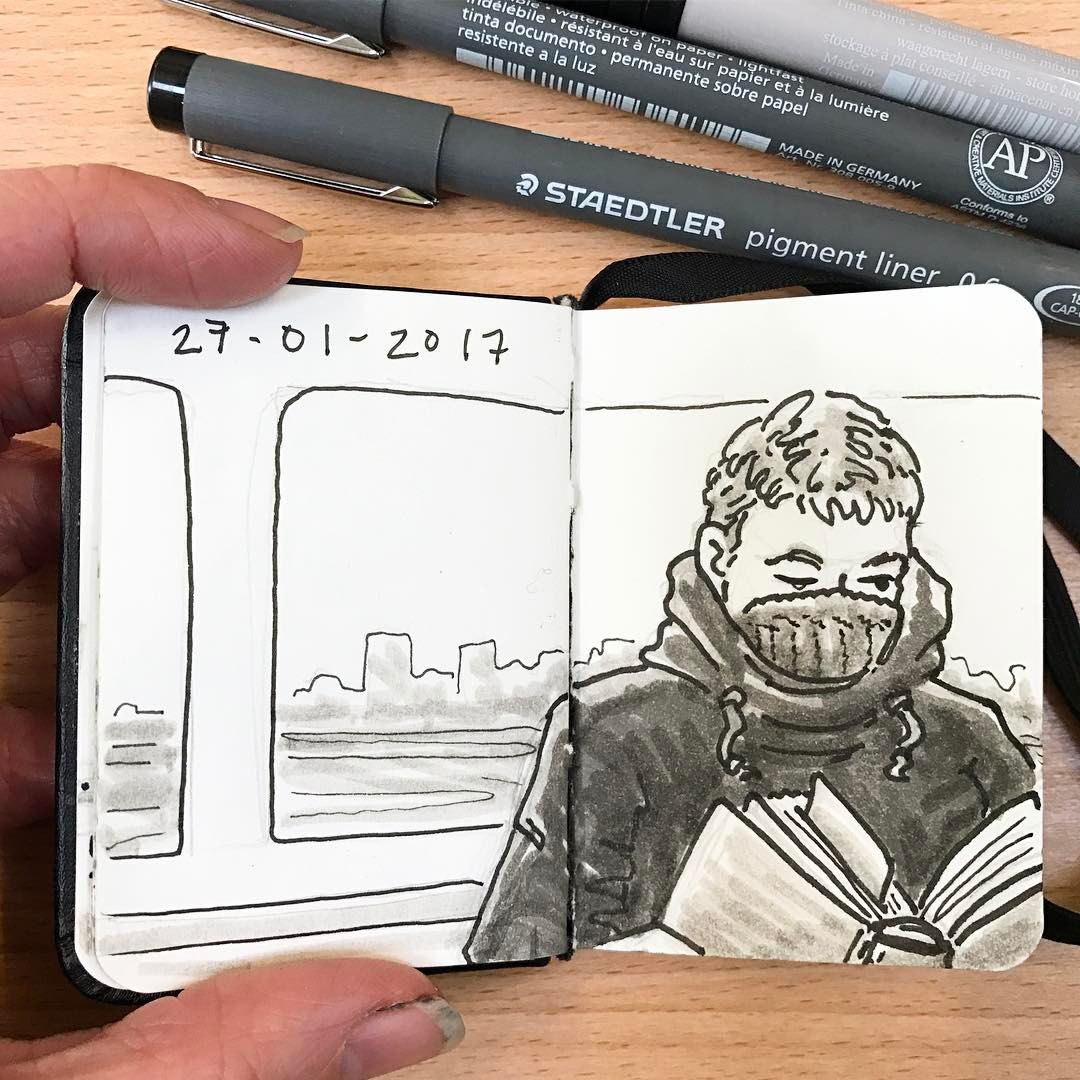 On the origins of the tiny sketchbook

I’m a person who’s always worried about not having enough time or not making good use of my time and I thought “well, I have twelve minutes on this ferry. I’m going to do something productive. I’m going to do something useful”. I try to sketch all the time and then I thought, “I want to take this tiny tiny sketchbook” (it’s the size of a palm). It’s the perfect size for looking and thinking about the people around me; looking at their faces. And that is what I started doing. It was a really good exercise in thinking quickly and choosing a subject then quickly putting it on paper, but it was also just invigorating. I would wake up every morning and be excited about what I would see.

I think one of the things that makes it unique from other forms of transportation is that everybody gets on and everybody gets off at the same time. You don’t have a lot of interruptions in this kind of unexpected collection of people, you’re all going to be there for the duration and everybody knows, “okay, this is the time between things”, and people will read or be on their phones or staring into space and choose to do whatever they want to do. But you’re all in it together. There is no getting off and there’s no other people popping on it any time. I think that’s also unique.

On the transition from sketching to filming

After I finished the sketchbook I didn’t have plans to make a movie. I have never really made movies before and I had always been a static visual artist. But these days, we all have so many tools around us where we can ambitiously try new media. When I was looking through the sketchbook I just had the feeling that there was more to it than the sum of its parts.

When you start sketching in January and you finish in May, you can see the sun coming out as you flip through the pages. You can see people’s postures changing and you can see them shedding their coats. It was an unexpected result. By drawing just about every day on the ferry I could look back and watch the spring come. That’s why I wanted to make a movie out of it because telling the story through time was the only way to really be able to express that. It was something I wanted to do. I didn’t really know how to do it but I did it anyway! 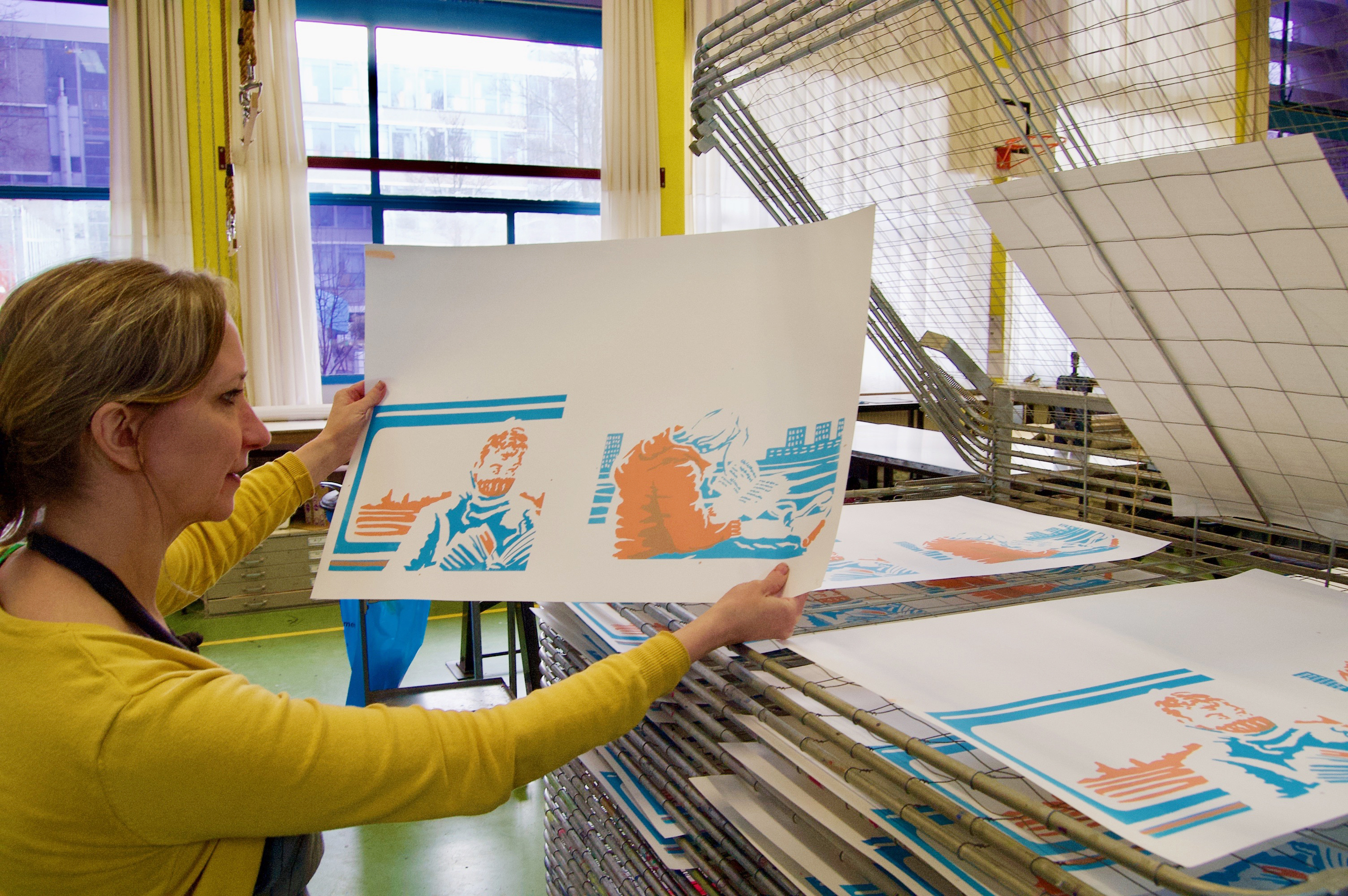 On developing her sketches into silkscreen prints

I’ve wanted to get back to silkscreen printing for a long time. It’s something I did in college. And, as a visual artist, I’ve been thinking about what I make and how I’d like to make it differently. I wanted to be more intentional with the way I use colour. One of the things about doing silkscreen prints is that you do have to be very intentional about how you use colour as you’re more likely to limit your palettes and think in terms of using a few colours rather than working digitally and having a little eyedropper and using every colour that exists in the world!

I wanted to push my own style further into using limited color palettes. Because I’m still in love with the faces that I found on the ferry, I thought that I could use some of those images to figure out how to work simply and abstract my style more, not just through the line work but also through the limited colour palettes. As there is the winter and the spring in this first book, I wanted to think about which colour expressed winter to me, which colours would express spring. I want to go back to the ferry at the end of the summer and then into the fall and do the same thing with another seasonal transition and try and just kind of discover how that would tell a different kind of story. 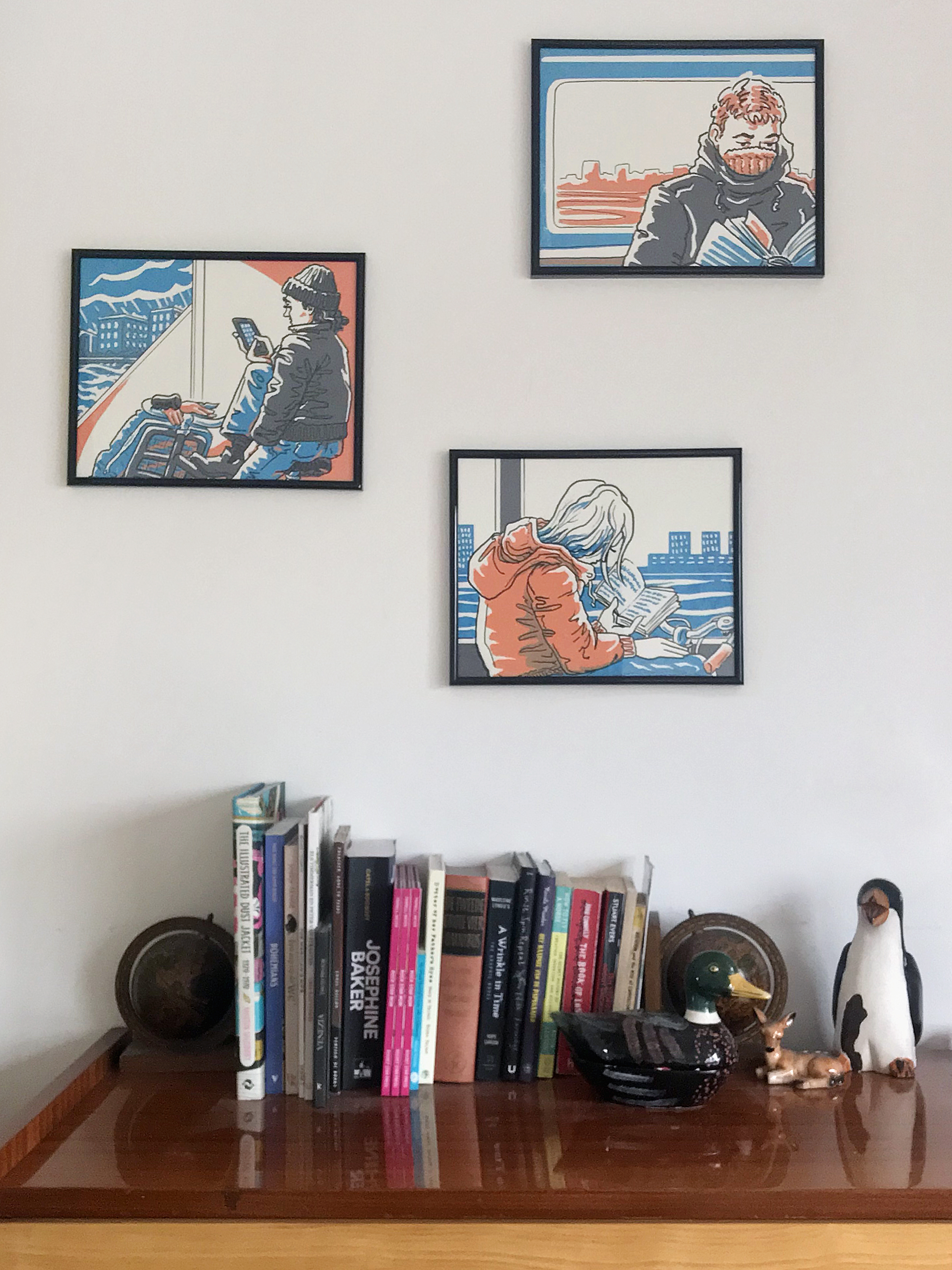 On simplicity of form

One of the things I’ve discovered is that when I start with very small thumbnail sketches instead of becoming increasingly complex as I have in the past (and in my mind kind of overly complex); is that when I work things out on a small scale I get to find the beauty and the simplicity of the form and then I hold onto that as I get larger. So that’s been one of the great things for me with this book; learning to work faster, smaller and find a shorthand of form that I’m happy with instead of just working all the time, getting lost in detail. I love the use of lines and I think about how a line would be an abstract expression of someone’s profile. I love how the line of someone’s nose can lead unexpectedly to his or her cheek and then into the neck. Not to be so literal with the way I would think of people’s faces or profiles. It’s like creating a shorthand for expressing a face.

Please take a look at Rachelle’s Kickstarter for more information on the evolution of this exciting project. 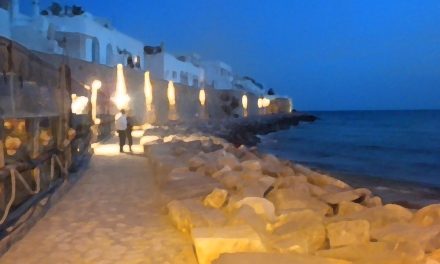 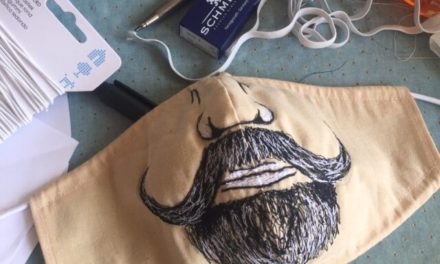 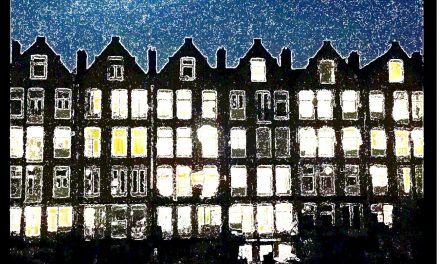 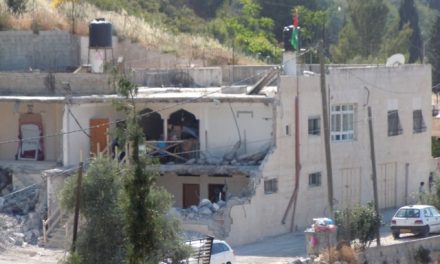