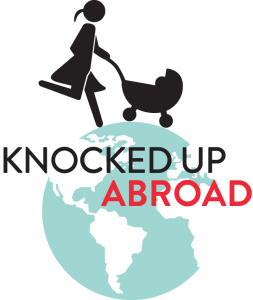 “Knocked Up Abroad is an anthology of 24 stories about the trials and joys experienced by 21 mothers and two dads who raised their families abroad. These life stories span several continents to highlight the infinite ways in which babies are welcomed into the world.” Amazon

Our second guest is Debi Beaumont, who is a British woman living in South Africa.  She has given birth to three boys on three different continents.  Her first child was born in the UK, second in Australia and third in South Africa.  She compares these three experiences with a bit of humour and reflects on both the challenges and advantages of each culture’s childbirth practices.  Having traded a successful career for family and adventure, Debi reflects on how her life has changed over the past decade and is thinking about what’s next for her…

“My 30’s seemed to sort of disappear into this fog of moving countries and babies…and it’s nice, actually, that somebody was interested in that portion of my life.” -Debi Beaumont

Our third guest is Lucille Abendanon, who has an interesting history.  She previously wrote a post for Hiraeth called The Roots of Dispersion.  Lucille has three nationalities:  British, South African and Dutch and has lived in six countries, following in the footsteps of her family’s fascinating nomadic history, which she’ll share with us in a follow-up episode.  She too, has three boys, but at the time of the interview, she was still pregnant with the third.  Her chapter is called, “War and Peace,” as it beautifully sums up her two experiences of giving birth in Turkey and in South Africa.

Lucille documents her “unconventional life on the move” on her blog expitterpattica.

Exploring Eze yesterday. The last time Berto and I were here we were just out of uni, having one last jaunt before he moved from SA to Vietnam. I was living in the UK working as a waitress/chambermaid, and was just about to land my dream job as a photographer in London. This time round we’re older and a little wiser, have seen the world, and have 2.5 kids in tow! 😁 PS Sawyer was off somewhere looking for ice cream, and Noah was TOTALLY over posing for pics 😂