One of the things we’re very keen on here at Hiraeth is reframing the narrative of migration to emphasize our shared experiences, rather than resorting to terms that can end up compartmentalizing those experiences based on characteristics like skin color, religion, culture, or economic status.

I just spent a wonderful weekend in The Hague at the annual Families in Global Transition Conference, which is focused on the latest research and methodologies for supporting expat families through the challenges of moving internationally. Conference presenters often shared their own poignant stories of migration, and we hope to feature some of them in upcoming podcasts at Hiraeth. While most of the conference speakers were coming from a Western perspective, I was particularly struck by research presented by Erin Sinogba, entitled “Our histories matter: Expanding our understanding of who TCKs are through the lens of history, heritage and nationality.”

TCKs (short for Third Culture Kids) are children raised outside their parents’ home culture, or the culture of their passport country(ies). Such children have a cultural identity that may incorporate elements of multiple home and host cultures, while being distinct from all of them. While TCKs gain valuable linguistic, adaptive, and other skills, they also sometimes struggle with the challenges of “fitting in”, both in a host culture and in their own “home” culture. Often, studies of TCKs have focused a majority of attention on the experiences of Western children raised in non-Western cultures. However, for Erin it is vital to also include the voices of children from other cultures, who have unique perspective to add to the conversation about TCKs. 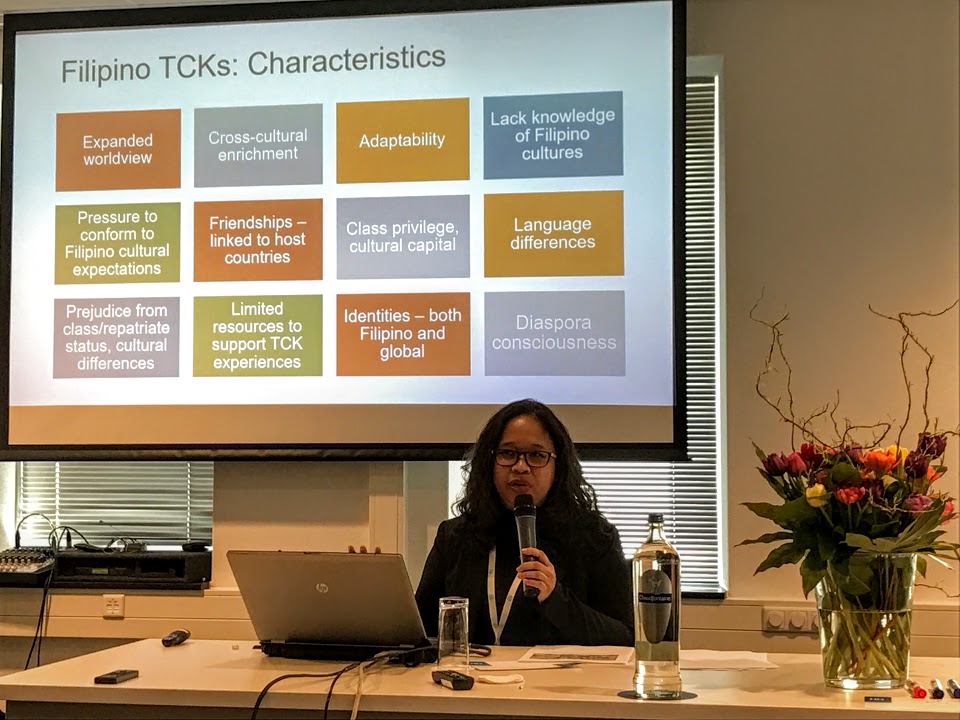 Erin’s interest in expanding the TCK narrative is more than academic. She is a Filipino citizen who was born in South Korea and raised there, the Philippines, and Grenada, and studied in the U.S.A., so she has lived a uniquely Filipino TCK experience. As well as advocating including Filipino TCKs in the wider TCK narrative, Erin is passionate about expanding the notion of a Filipino identity to also include the unique voices of Filipino children who are transnational, whether that means they grew up all or partially abroad, they have a non-Filipino parent, or they are growing up in the Philippines with parents who are abroad working in other countries.

Erin says:  “In my late teens and into my early twenties, I was very interested in Filipino nationalism, but upon moving back to the Philippines in my mid-twenties, I learned that I was not considered a legitimate part of that conversation because of perceived differences stemming from my background. I have since made it a personal advocacy to talk about my experiences and hopefully contribute to the ongoing definition of what it means to be Filipino by challenging notions of “authenticity” and opening people’s minds to the idea of diversity in Filipino identities.”

In 2013 she made a short documentary profiling four Filipino TCKs who talk about their experiences growing up in different cultures. Her subjects talk about trying to define or challenge what makes an “authentic” Filipino experience. This feeling of still belonging to the cultural identity of your passport country in spite of growing up elsewhere is common among many TCK’s- but what is it like to go “home” to this country and suddenly feel like a foreigner?

Erin is the Local Chapter Leader of TCKid Philippines since 2012, and  advocates for TCKs and other transnational people as a member of the board at TIGRA (Transnational Institute for Grassroots Research and Action) Philippines. For more, check out her article: “Pinoy diversity in a Hyper Connected World”